Sometimes, you meet people and you know that you were just meant to cross paths somehow.  As soon as you lock eyes and shake hands you know that this was meant to be.  This connection between one human being and another, one heart to the next, souls that intertwine.

My boss Takada-san is exactly one of these people.

I’ve mentioned her a few times on here.  My boss that could rule the world if she pleased, but can’t handle the burden of it all.  A Japanese woman that gave up everything to fight for her rights in a society that wants to keep her at home and tied to the kitchen.  A woman that wanted to be more than just that; she aspired to be a leader, a creator, and most of all a traveler–and she succeeded at it all, but at great cost.  She looks of a woman tired from the relentless pressure and overtime of the Japanese ad agency world.  Despite her experience as being CEO of multiple companies in the past, she continually refuses our headquarter’s offer of taking the position once again.  She’s had enough, and you can tell at her age she just wants to soak in a hot spring or dive in the maldives.  She’s simply tired of changing the world.

During a slow afternoon at the office, I was telling Takada-san about my hometown: a desolate mining community located in a remote desert in the middle of nowhere.  She wasn’t phased until I showed her the pictures of just where I spent almost 20 years of my life:

“Good lord, Mary” she looked from the photos of my hometown to me.  “For you to go to Japan and China… from here….That’s simply unbelievable.  It must have been incredibly difficult to learn Japanese in that environment.”

She paused a moment then said, “Maybe, just maybe, you were Japanese in a past life.”

“I’ve considered it,” I quickly replied.  My mother said the same thing to me multiple times.  It made sense.

“There’s a fortune teller in Tokyo extremely famous for reading into past lives.  All of the celebrities go there in search of their former selves.  My friend introduced me to the place, and I went once.”

“Oh yeah?”  Not your typical office conversation, but definitely piqued my curiosity.  “What did they say?”

My life as a Hostage

“I was born in Okinawa, almost 200 years ago.  My parents were merchants and we traded with different countries from Asia; mainly China (one reason I’m in China now, perhaps), Vietnam, and the Philippines.  The most important part of my life, however, was the sea.  You could always find me playing on the  beach, continually enjoying the rays of the sun.  I never quite liked the cold; it seems even back then I was afraid of anything but tropical weather.  I enjoyed much of my childhood and younger adolescence in Okinawa, swimming in its clear turquoise waters and spending time with my family.

When I was 18, there was a dispute between my merchant parents and fellow traders.  I don’t know the details, but there was a fight and I was kidnapped and taken by the opposing merchants.  I was kept as a hostage of some kind, and for some reason I was taken to Vietnam.  My captors may have been Vietnamese, I don’t quite remember.  They later  sold me to another wealthy merchant in town, and I became one of his many wives.

I lead out the rest of my life in Vietnam and I  was unable to return to Japan.  Although I was in a completely foreign culture,  I was still grateful to be in a place near a familiar friend: the sea.  I like to think that I most likely spent my life in Nha Trang or Hoi’An, peaceful fishing villages in Vietnam that were ports of trade years past.  I was a good wife to my husband and I never suffered–but I still spent most of my time looking out the sea, longing for home.

The fortune teller told me that the theme of my life was ‘finding a way back to home.’

I think that for my life now, it’s still the same.  Going home.  Maybe in my next life I’ll finally achieve what the old me so desperately wanted–to go back to Japan.  To return home.”

Like most Japanese she doesn’t say anything out loud, but I can see it in her eyes.  Sadness and a tinge of regret.

The next line that came out of Takada-san’s mouth is what surprised me the most (especially at 5:30 PM in an office full of people):

“I think we crossed paths back then in Vietnam, Mary–don’t you think?  I was in Vietnam back then, and maybe my family did trading with yours.  It’s completely plausible… that is, if all of this past life fortune telling even has an ounce of truth.”

Not something your boss says to you everyday, but in that moment she was more than just my boss.  She was my friend.

“They say that if you were close to someone in a past life, you’re destined to meet them again in the next,” she smiled to me.

I didn’t know what else to say, other than “I think so, Takada-san.  We most definitely met back in Vietnam.”

If there’s anyone that encourages me to do more with my life, it’s Takada-san.

“I could never get into an ivy-league school like Harvard or something,” I said off handedly once.

“Yes you can,” she immediately snapped back.  “And why not?  You’re smart and you have your whole life ahead of you.  Apply to an ivy league school,” she commanded.

Japan needs more women like Takada-san.  Respectable women that have accomplishments other than raising a family.  Women that stand up, lead, and and take charge of their life.  Women that are not only powerful, intelligent and commanding; but manage to keep a soft and endearing kindness that keeps them from becoming an intimidating “business woman.”  Takada-san has a soothing voice, a warm smile, and a kind heart–which is what makes her a leader that everyone loves.

“Don’t you ever settle for less, Mary” Takada-san always tells me.  “Become a CEO.  A famous author.  A diplomat.  Become what you want to be, and don’t let anything stop you.”

But the most touching thing she’s done thus far is what she did for me today.  She brought back this book for me from Japan: 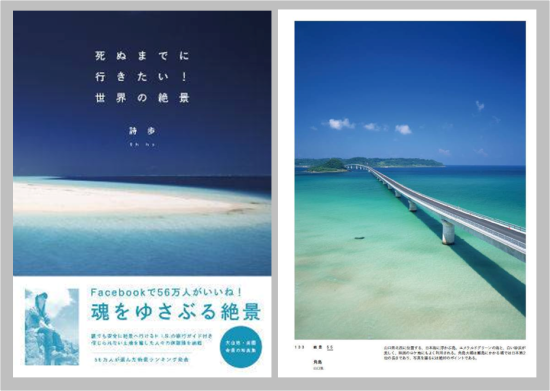 Places to go before I die!  Stunning scenery of the world

When she gave me this book, she looked me in the eyes and said:

“Don’t stop traveling.  You still have so many places to go, and I want you to see the world.”

I know I’ll never have a boss as wonderful as Takada-san ever again.

But I also know that Shanghai won’t be our last meeting–in this life, or even the next.