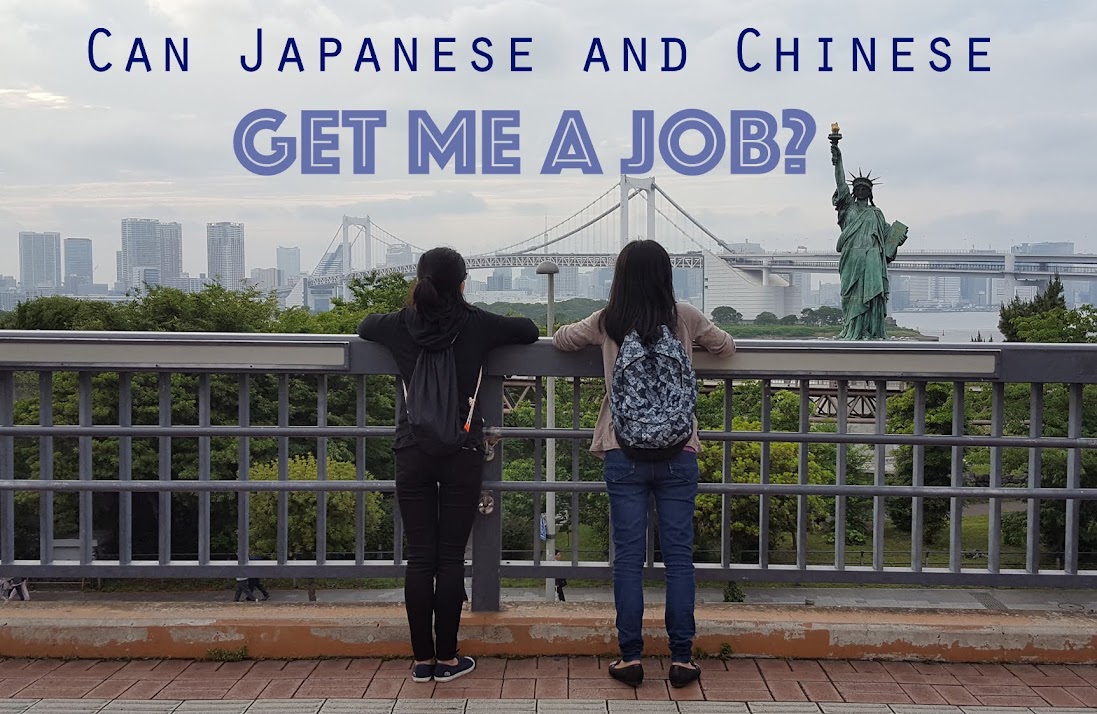 According to the news, China is about to rule the world and the Japanese are poised for extinction via low birthrates.  With an ever-rising China and a Japan on the decline, one has to wonder:  Will learning Japanese actually get me a job?  And more importantly, will learning Chinese get me an even better job?

In my post “should I learn Japanese or Chinese?” I gave the cop out answer of “go with your heart.”  I still stand by this super cheesy advice.

However,  via this particular post, I received multiple emails from young college students asking for even more advice.  What kind of jobs can I get with these language skills?  What level of proficiency do I need?  And most of all: Are learning these languages just a massive waste of time?

The combination of these questions, and my recent job hunt, has led me to the following conclusions:

Japanese is Not Useless 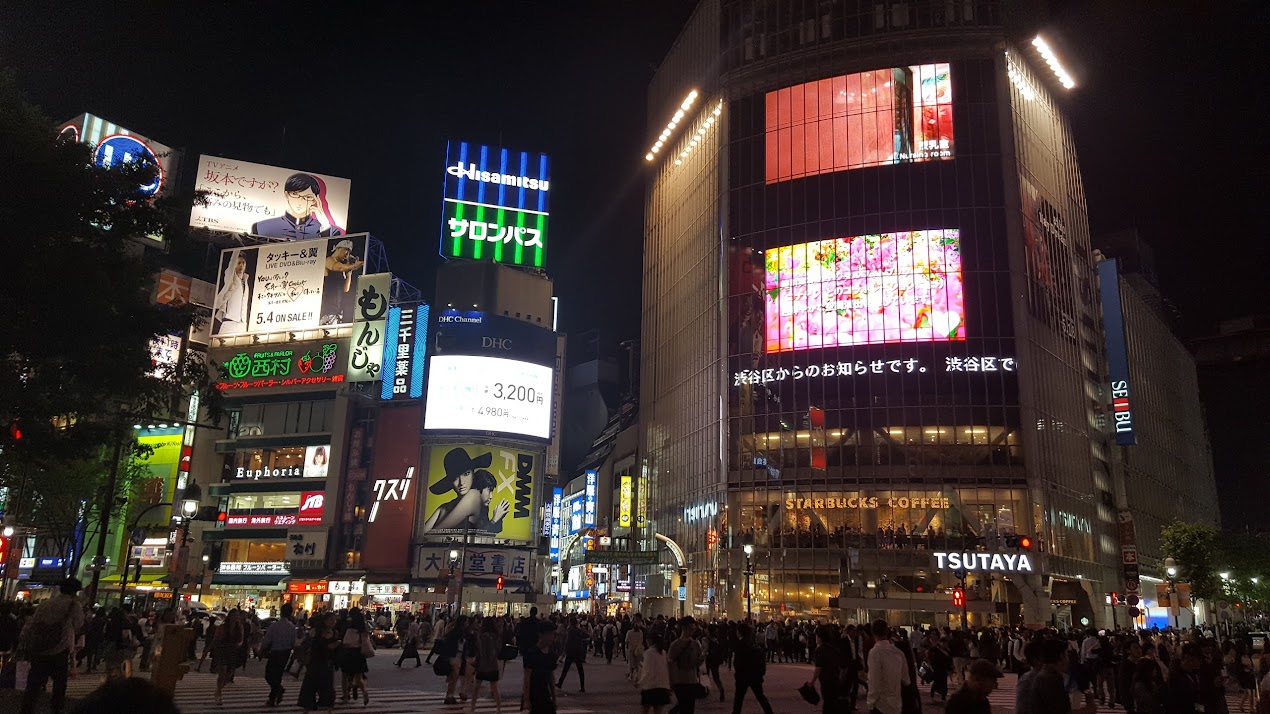 When I first started learning Japanese, it was still the number two economy in the world.  Japan was going places.  They had Sony, Hitachi, Toyota, and a bunch of other recognizable and respectable companies.  I thought knowing Japanese would really take me places.

Then China surpassed Japan economically, took its spot at #2, and totally stole the country’s spotlight.  My graduate program not only slashed the number of Japanese courses in half, they fired all the Japanese professors until there was only one left and cut the Japanese foreign language track.  Just to spite Japan even more, they hired three new China professors and added an entire major that was wholly China focused.

All of these events led me to believe that my Chinese skills were going to get me that big job.

But guess what?  After applying to dozens of jobs, both of which needed either Chinese or Japanese, I was hired at a big firm for my Japanese skills.

Japanese Skills Are Great For the Private Sector 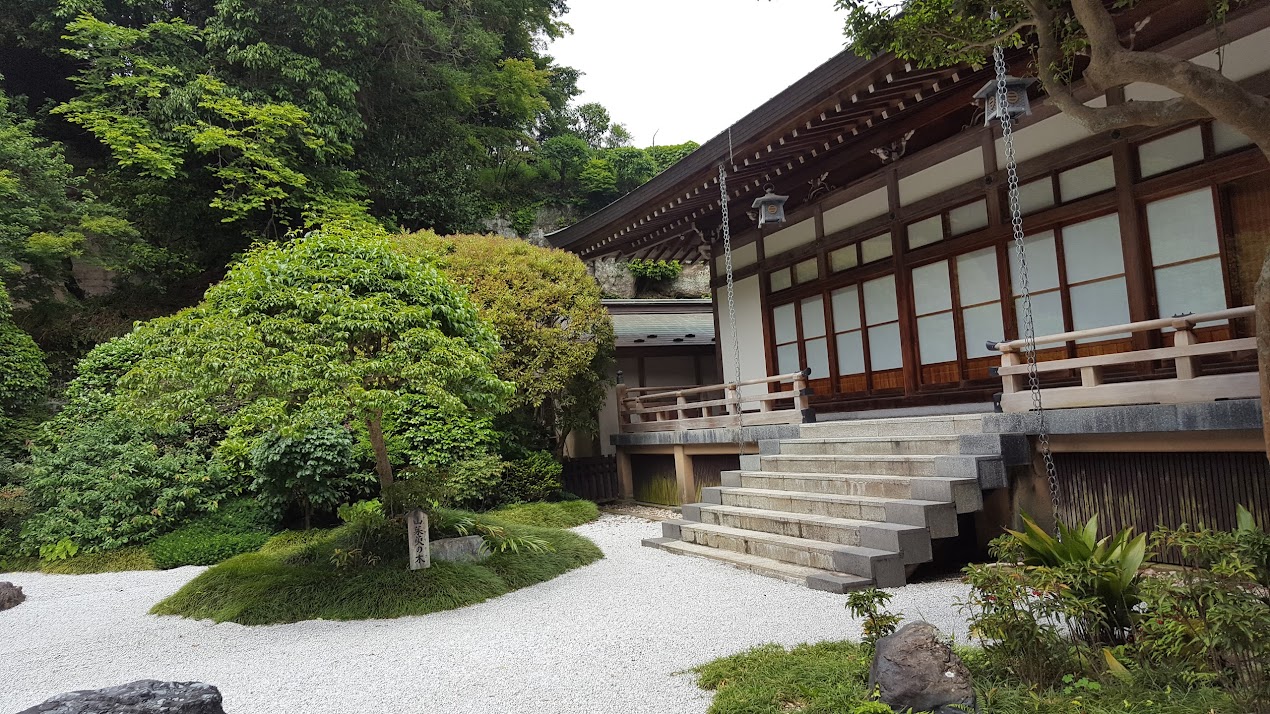 China’s growth may be exponential, but it is still a developing country with a relatively unstable market.  China still has yet to produce reputable corporations and stable businesses to attract widespread investment.  Aside from Lenovo, there are few Chinese brands that households recognize and trust.  China, despite taking the number two spot in GDP growth, still has a way to go if it wants to stand on par with Japan as both a stable and trustworthy economy.

Japan’s economy may be sluggish, but its corporations are not.  I could write an entire post about this, but let’s just say a fair number Japanese corporations are rather profitable.  Softbank acquired Sprint.  Suntory acquired Jim Bean.  Uniqlo is rapidly expanding.  Japan is still making money and, most of all, is a huge driver for business.

All Japanese jobs I applied to were, largely, in the private sector.  Despite Japan’s “decline,” there were still a high number of jobs that not only demanded Japanese language skills, but also Japanese cultural aptitude.  Whether its linguistic or cultural, companies are constantly on the lookout for individuals who are familiar with Japan.

Why is this?  Well, I think it’s lack of supply.  It is very hard to find talent both bilingual in Japanese and English.  This could be due to Japan’s education system, the vastly contrasting linguistic differences between English or Japanese, or perhaps even the lack of Japanese immigrants.  Despite the reason, this lack of bilinguals creates huge demand from private corporations.

So just how good does my Japanese need to be to get this job?

I’ll be blunt: your Japanese needs to mind-blowingly good.  Like, you can watch Japanese news, pick up a Japanese newspaper, and talk Japanese politics with a local–and all without picking up a dictionary.

At the bare minimum, I recommend passing JLPT Level 2. However, as I wrote in the Japanese or Chinese post, Japanese is WAY HARDER than Chinese.  Passing JLPT 2 could take years of your life.

Chinese, on the other hand, is great for the public sector 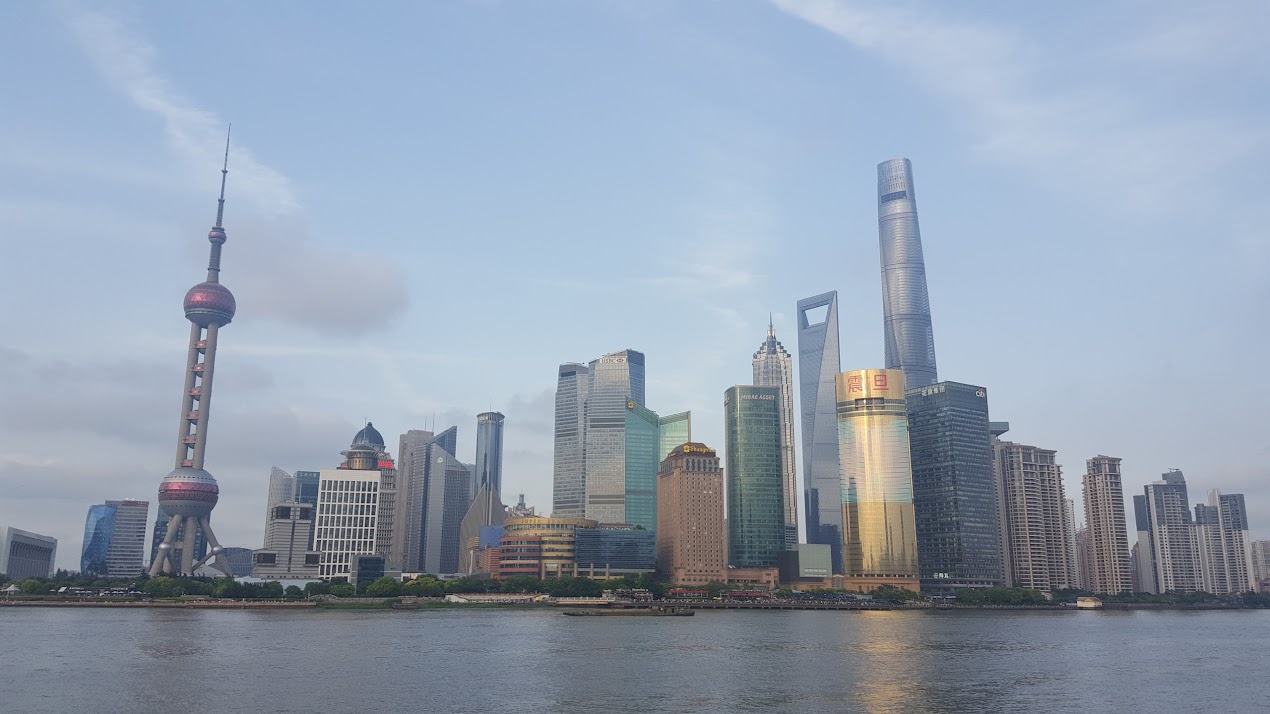 I lived in Shanghai for four years.  I met Chinese people from everywhere.  Anhui, Guangzhou, Wuhan, Sichuan, Ningbo, Beijing, the list goes on.

What did they all have in common?

Their English was AMAZING.

In general, Chinese people speak better English than their Japanese neighbors.  I don’t have evidence of this, it’s all from personal experience, but it was overwhelmingly evident during my stay in both Japan and China.  In Japan I only met a handful of locals who could speak English well.  In China, there was hardly anyone I met who couldn’t speak English.   In fact, some of my friends were so good they could pass as American Born Chinese (ABC).

And what do most Chinese people want to do with their English fluency?

Make money (aka work in the private sector).

Where does one work not for money, but for stability and a good cause?

When I was job hunting I found dozens of Chinese-speaking jobs for the US government.  I often wondered why these jobs were not being filled or how I had a chance in hell to even interview for these high-ranking positions.

But then it hit me: Only US nationals can apply for (most) federal positions.

And while the US has no shortage on ABC US nationals, many of them did not grow up fully bilingual.  In fact, beside my husband, I don’t know any ABC who can read and write Chinese characters.  They are in short supply.

So if you speak baller Chinese and want to work for the government–then I say your odds are pretty good.

So just how good does my Chinese have to be? 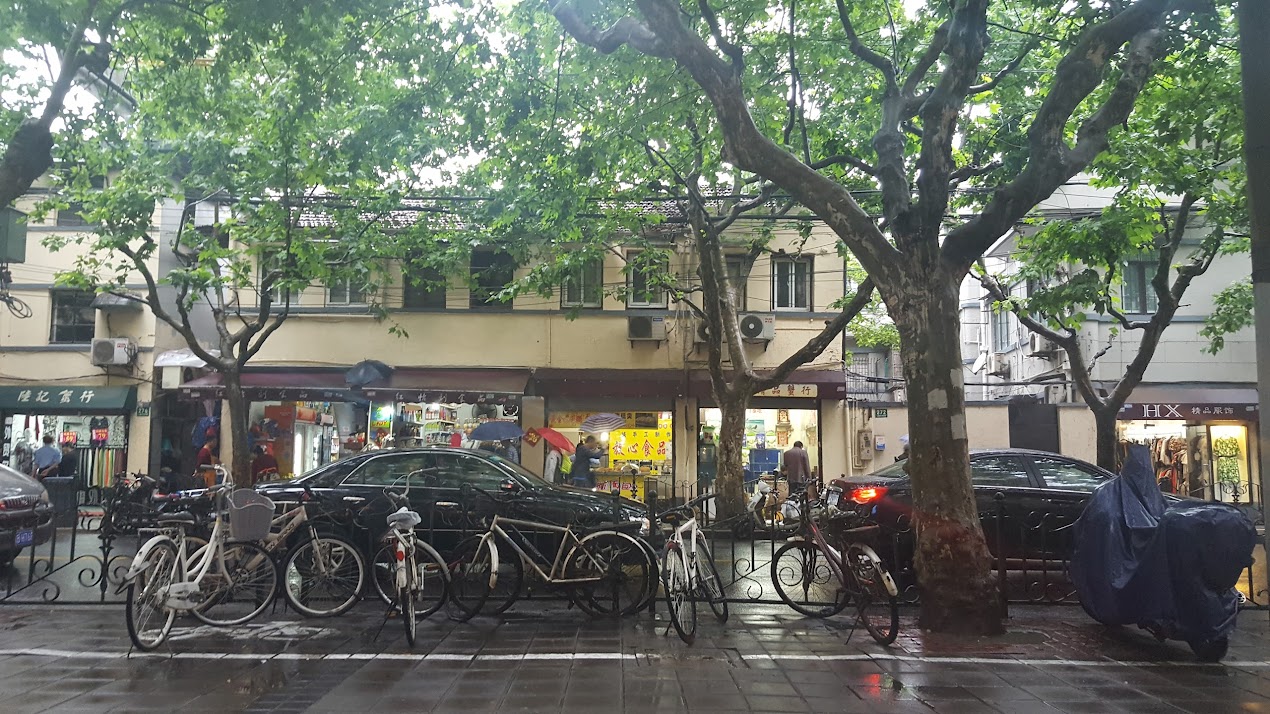 When I interviewed for jobs that required Chinese, they didn’t just interview me in Chinese.  Oh no.  It was much worse.

I wrote a three page marketing plan in Mandarin.  They still didn’t hire me.

I had to translate a four-page, hand written document on rubber tariffs from Mandarin to English in one hour.  they didn’t hire me.

I had to write a hand written essay in Mandarin about the Chinese economy in 45 minutes.  They didn’t hire me.

The Most Important Job Hunting Advice I Have to Give is….

Foreign Language will not get you a job (as I wrote in a previous post).  Foreign language is a supplemental talent.  If possible, first focus on a primary skill, a hard skill, and use foreign language to make that skill even more desirable.

I made the mistake of focusing purely on language, and I paid the price for it.  While my language skills have gotten me jobs I never even dreamed of, I would be fairing much better if I had gotten a law/medicine/engineering/business degree and then studied a language.

Even if you do just study a foreign language, though, I have to say… you will be ok.  Japanese and Chinese (and Korean!) are incredibly useful languages to know in this day and age.  They both clock in at #2 and #3 economies respectively, are hard languages to acquire, and can provide work in both government or business.

In the end, I just gotta give my cheesy advice again: go with your heart.  These languages are crazy hard to acquire.  You gotta love it to learn it.

To me, Chinese and Japanese just aren’t languages.  These languages represent food, culture and friends.  These two languages have given so much joy and excitement to my life that, hell, I probably wuldn’t have met my husband without them.

So, go with your heart.  You won’t regret it.

What Has Gotten You Ahead in Your Career?

19 thoughts on “How Can Learning Japanese or Chinese Get You a Job?”