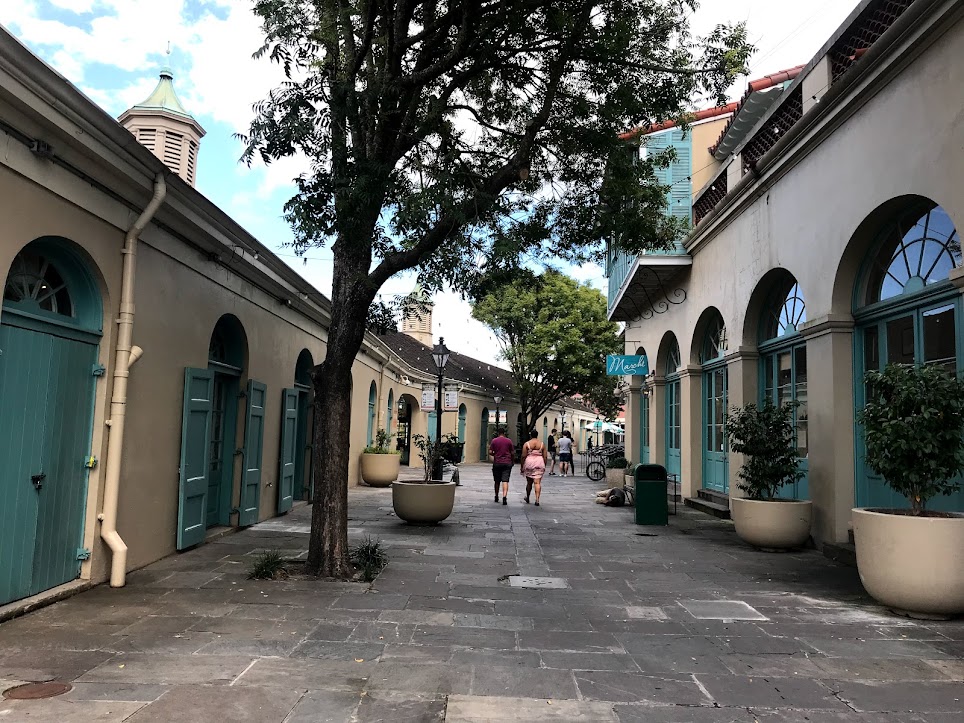 A few weeks ago I went to New Orleans, Louisiana for the first time and enjoyed a blissful weekend there filled with historical sights, classic soul cooking, and most of all–jazz. (Travel tips at the bottom of post)

For most of my life, I wasn’t much of a jazz fan and never once considered the thought of going to New Orleans.  In fact, I took a “survey of jazz” class in undergrad mostly to 1. get an easy “A” and 2. catch up on lost sleep.  For most of my life, jazz was music to be played in the waiting room of a doctor’s office or in an elevator.

Tohko is my Japanese soul sister.  She dragged me to live jam sessions in Shanghai where the jazz (and Tohko) literally swept me off my feet.  When I lived with her to escape my flea infestation, she would put on her favorite jazz tune, take me in her hand, and whisk me away to dance on the living room floor.  We toe tapped while we cut vegetables, listening to jazz as we cooked dinner.  When we cleaned the apartment, Louis Armstrong was blasting on her stereo.  I was an easy convert.

Going to New Orleans never once crossed my mind until that moment–but after she uttered those words, I couldn’t stop thinking about it.  Then, I moved to Texas.

Welcome to New Orleans: A City of Many Cultures

As fate would have it, Tohko and her new boyfriend arranged a visit to New Orleans while I was living in Texas and graciously invited me to be the third wheel–I mean, be a lovely addition–to their New Orleans vacation.

And wow, New Orleans blew all my expectations out of the water. 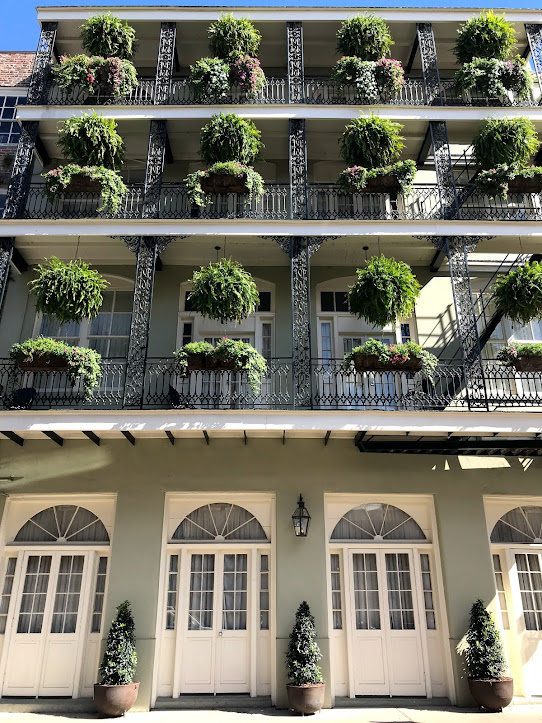 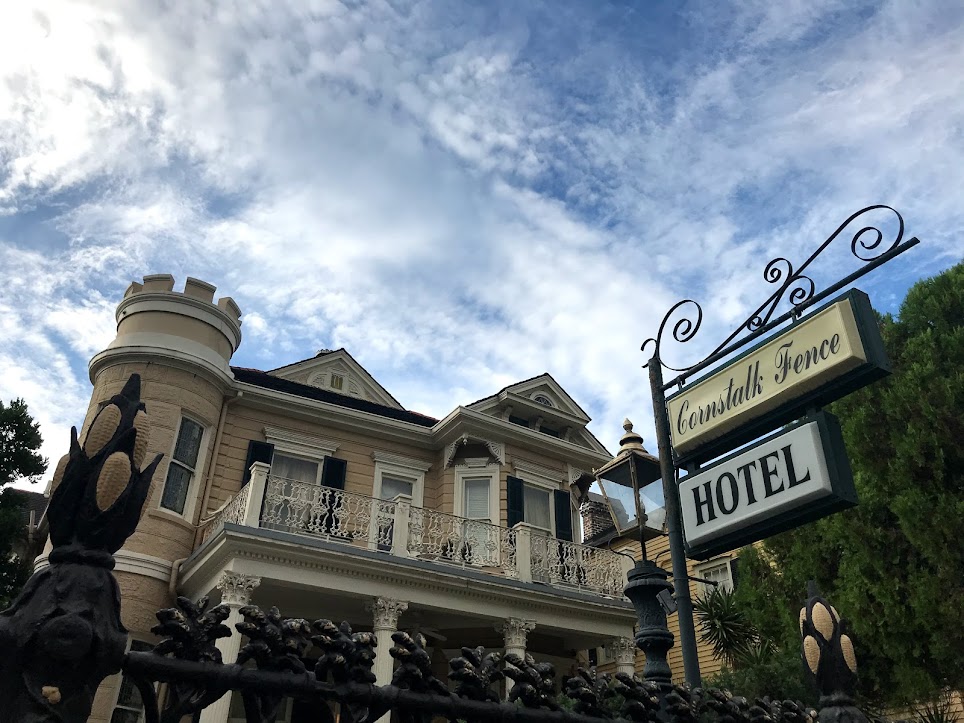 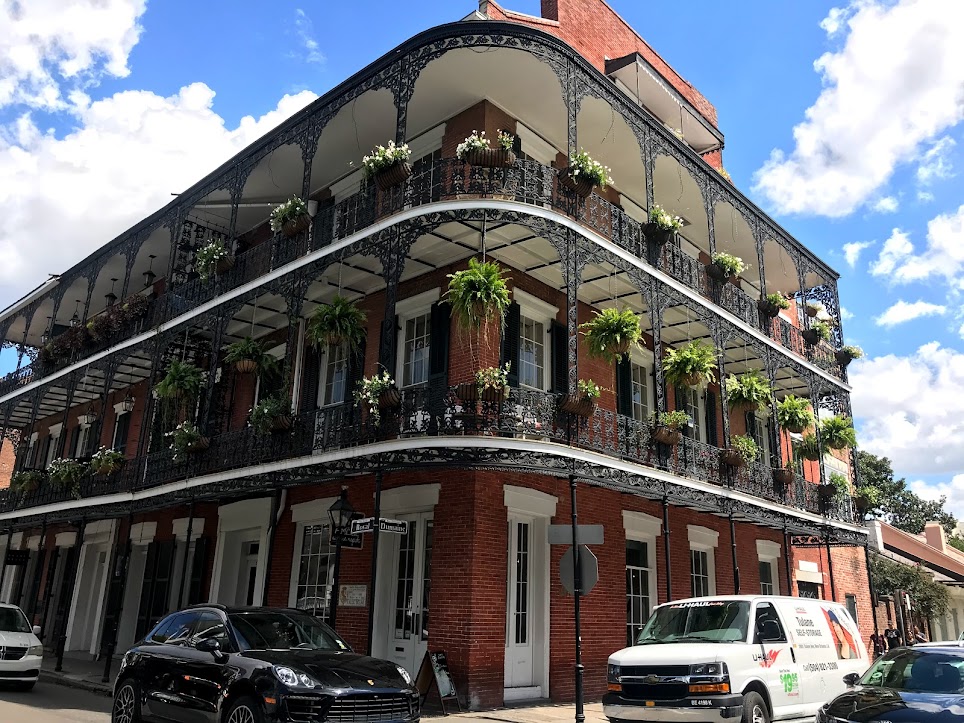 New Orleans has a culture that is uniquely… New Orleans.  It’s a blend of cajun and creole, French and Spanish, American and Southern.  As the birth place of Jazz and Cajun culture, the city has a unique identity that is simply not found anywhere else in the world.  It’s the kind of place you can walk around and hear music wherever you go–the whimsical noise of a jazz trumpet seeps out of every doorway, every window.  Foots are tapping everywhere in some kind of rhythmic beat that has entranced the whole city.

The music in the air.  That charming European architecture. That sweet smell of beignets and sugar wafting from the center of the French Quarter.  The echoing laughter of tourists on vacation, the tack-tack-tack of the old trolley carrying visitors around the city on century old rails.

I could wax poetic about New Orleans architecture and jazz all day, but let’s go straight to my favorite part of New Orleans: this outdoor wine and jazz bar a stone throw away from the Mississippi, and far away from the French quarter.

Bacchanal Wine came highly recommended to me by all my friends (and even travel shows); and wow, it’s one of those places where you’ll have an enchanted evening no matter what you do.  It’s a no-frills house converted into a wine cellar selling some of the best pours you’ll ever have, with some simple southern fare to match.  While the wine and fish may be top notch, you’ll enjoy these delicacies sitting on a humble plastic lawn chair matched with a metal table in the outside courtyard, listening to some of the best jazz New Orleans has to offer on a make-shift wooden stage.

Like many places in the south, the Bacchanal Wine bar is as low-key and local as they come.  It was the kinda place one could frequent in a nice dress, a suit, jeans, or shorts and a t-shirt–and no one would feel it was out of place.  It was the ultimate hangout joint.

Tohko, her new boyfriend and I all ate delicious fish, drank a bottle of wine, and listened to live jazz until the stars twinkled above us.  It was one of those magical evenings that only New Orleans–and Bacchanal–could offer.  I can’t recommend this place enough.  Take a taxi/lyft, get out of the French Quarter, and spend a few hours here.  You won’t regret it.

And the Best Jazz Clubs?  The Spotted Cat and Fritzels Jazz Cafe

It’s been a struggle for me to find half-decent jazz bar.  Since my return from Shanghai, most Jazz clubs I’ve visited are filled with half-assed bands ready to make a quick buck.  Others are a little too orchestrated and stiff for my tastes.

I will say with certainty: the jazz in New Orleans is the real deal.  They play the classics mixed in with their own creations, followed up by the passionate outburst of random jam sessions.  At these two venues in particular, the music ultimately captivated the audience in attendance.

The Spotted Cat feels like a jazz bar built for swing dance–and that’s because you’ll most likely spot some professional swing dancers twirling at the front near the stage.  It’s a popular joint with a mix of locals and tourists; with the real locals twirling and dipping and jiving and tapping in full swing-dance gear near the band.  The energy of the venue is infectious and, while it can be crowded and noisy, the music is still the star of the show. 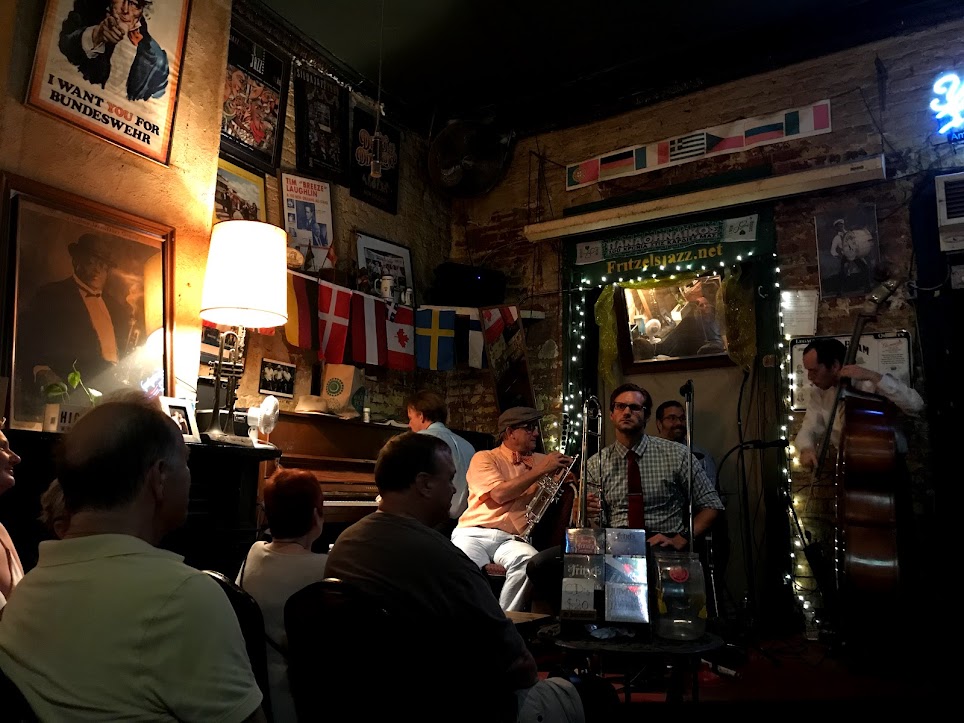 Fritzel’s, on the other hand, is a more low-key joint where one can sit, have a beer, and enjoy the music.  Wooden benches line the stage (with plenty of room for standing when it’s crowded).  Although the bar has a low hum of conversation in the background, most of the audience is enchanted by the energy and class of the Fritzel Band.

“Come on down,” the lead sings sweetly in the microphone, taking a break from his trombone solo. “Come on down to New Orleans.”

And finally, if you’re a real jazz fan, you know you gotta fork over the $20 to go to Preservation Hall, the supposed birth place of some of the most legendary jazz songs in history.  In summer it’s a sweltering shoebox of people, and in winter I hear it’s as cold as death–but for the jazz-dedicated, this is a must.

New Orleans is Worth Your Weekend Visit 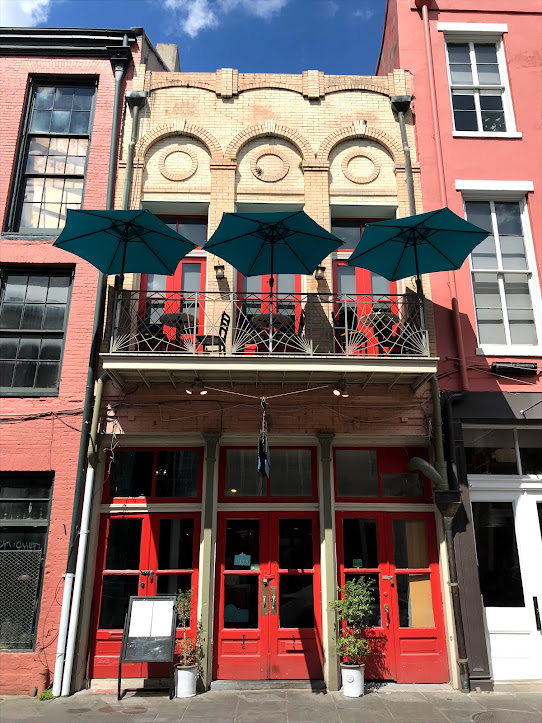 To many, New Orleans may just be the Southerner’s alternative to Las Vegas.  It’s an easy to place to get drunk cheap and party (hell, you can drink booze in paper cups on the street).

Bourbon street is a crowded cesspool of drunk college kids and bachelor parties–the kind of nightmare you had in your early twenties and never want to repeat again.

But once you look past the 5-foot long daquiri tubes and scandalous madri-gras costumes–you’ll discover a city with a rich history and culture and music that is simply unrivaled.  If New Orleans was a living organism, and it had a circulatory system, then jazz and soul music would be the blood of the city.  You can hear it–feel it–everywhere.  The architecture tells a history of French colonizers, Spanish conquerors, the slave trade in the South, and even the hardships of post-Katrina.  It’s a city with soul and spirit.  It’s a city worth going to.

Tohko had high hopes of New Orleans.  Like I dreamed of going to Japan–she dreamed of coming to America and going to New Orleans–and it did not disappoint.

Where to Stay – The Eliza:  We stayed at the super swank and hip Eliza Hotel, a former newspaper/pasta factory reconverted into a posh Hyatt hotel.  it was $$$, but it’s gorgeous. 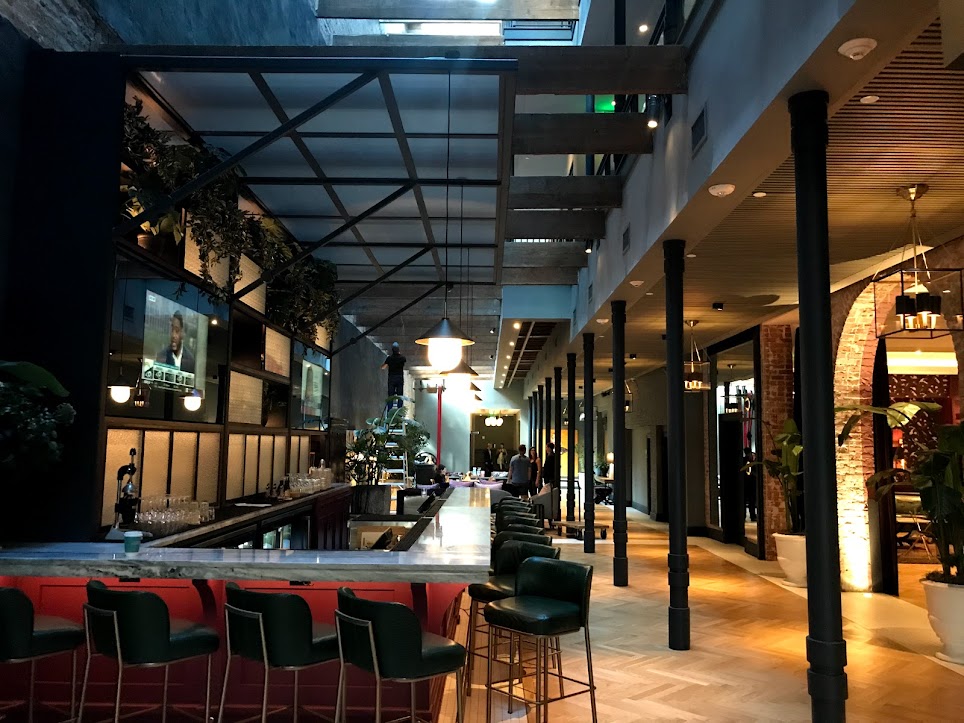 Where to Eat – Coop’s Place: When you walk in, you’ll look around the restaurant and think: dear God, what a dump.  While this restaurant is a bit rough on the edges, the gumbo is to die for.  The fried chicken is heavenly.  Just don’t use your cell phone at the table–the waiter will scream at you to stop and talk to your fellow human beings.

Where to Shop: Shops of the Colonnade (the French Market) is a humongous open-air market that sells food, trinkets, souvenirs and more.  One could easily spend half a day here.  This is adjacent to Cafe-Du-Mond (and stretches on for at least a mile long).

The Touristy Must-Dos: Go to Jackson square.  Go to Cafe-Du-Mond (the beignets are actually really good).  If you’re into the macabre the cemetery is pretty cool.  Ride the street car.  And the French Quarter is touristy, but it’s so lovely.  I could spend a day just walking around the French Quarter and photographing the buildings all day–but that’s me. 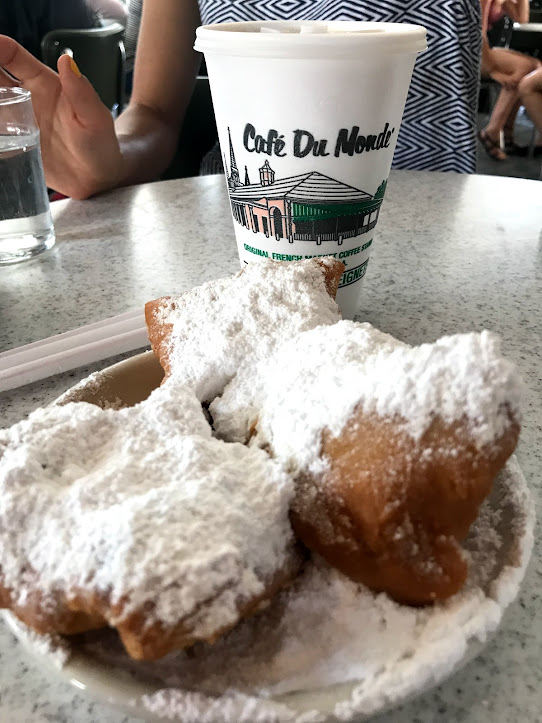 When to Go: February to May, and maybe October to November.  We went in late September and it was still quite humid and unpleasant.  Hurricane season lasts until November 30, but if you go at the tail end you might miss it and get some spectacular weather.

And Don’t Forget To: Pack the bug spray! Holy shit I was eaten alive.  Don’t make the mistake I made!

Have you been to New Orleans?

10 thoughts on “My First Weekend in New Orleans, Louisiana”