Habits. Schedules. Rituals. Sometimes it feels great to have routine in life, and nothing makes you feel warmer and fuzzier than finding out you have one in a foreign country. It helps you realize that yes; unexpectedly, you somehow managed to plant roots in this new place that you somehow home. The city is accepting you not as a foreign object or something that needs to be discarded; but rather, it’s slowly warming up to you and inching in closer and closer like a curious kitten meeting its new master.

Today, I realized I have a new routine and I didn’t even know it.

Every morning I walk to work, and it’s the best walk ever. I walk down Shanxi, take a right at Jiashan, go up Maoming and hit my office near the world’s largest UNIQLO (yes, I work in the world’s largest 6 floor UNIQLO). I live in the heart of Shanghai in the French Concession, which is quite easily one of my favorite places in the entire world. On my walk to work I’m looking up to a criss cross of bamboo poles thrust out of French windowpanes, a rainbow of laundry hanging on them to dry. I’m inhaling the smell of freshly made soy milk, dumplings and buns for sale in the early morning. I smile at the fruit vendors with their colorful array of both familiar and exotic delicacies. I dodge bicycles and crazy taxi drivers all while listening to some good tunes on my phone.

I like to cook breakfast at home, but every now and then I’ll sleep in and opt to buy breakfast on the road to work. My location of choice is my favorite Japanese convenience store, Family Mart (don’t tell 7-11 I said that).

Anyway, unlike Family Mart in Japan, the pre-made onigiri in China tastes like rocks (I even chewed on something hard when having one previous), the bread is over sweetened, and the sandwiches taste like ass. However, Family Mart does make hot soy milk and offer a variety of baozi (dumplings) to choose from, something that the Japanese branches definitely don’t have. There’s the pork dumplings, the vegetable dumplings, the red bean paste dumplings, hell—they even have mochi corn dumplings. I’ve tried all of them, and each and every time, after one bite, I immediately threw it into the nearest garbage bin (and trust me, I eat anything, so for me to throw away food it must be pretty damn bad).

But there is ONE exception. Only one mouth watering, appetizing, hunger satiating bun of a bun that will make you feel good in the morning.

Therefore, when I loop into my Family Mart on the way to work, I already know my route. I step through the automatic doors, take a right, swing by the drink section to pick up some orange juice, take a left into the candy aisle and head straight to the counter to ask the fuwuyuan (clerk) one of the most important questions of my morning:

“do you have cha shao bao?”

According to extensive data and research, most of China already knows the cha shao bao is the best bun in the Family Mart steamer.  So, it’s really heads or tails whether I’m going to get one or not (high demand, what can I do?). When they say “yes, we have some” I actually say ‘oh yea!’ and give the fuwuyuan a high five. When I get a “no, all sold out” I immediately scream“NOOO!!!” and castrate myself onto the cashier’s table. After fuwuyuan pushes me away, I mope to the bread aisle and buy…

Dorayaki is a Japanese snack that is basically two mini pancakes sandwiched together with red azuki beans.

I don’t even like dorayaki that much, but compared to all the other crap that Family Mart sells, it’s the only edible thing besides the cha shao bao.

So the above scenario has happened quite a few times, and all the fuwuyuans know me. The last four mornings I’ve been busy and without time to make breakfast, so I’ve made a stop into the Family Mart for cha sha bao—and each time, they were sold out.

Yesterday morning, as soon as I set foot into the Family Mart, the fuwuyuan catches me and before the words ‘ni’ even leave my lips, she yells:

“NOOO!” I cry, and hand her a tear stained dorayaki to serve as my pitiful breakfast instead.

This morning, I walk in again and the same girl is there. When we lock eyes, we both know what’s up. “No cha shao bao?” I raise my eyebrow. She shakes her head with a warm smile, “I was going to prepare some for you today, but I forgot. I’ll be ready next time.”

I sigh, smile, and hand her my usual orange juice and—yes, the dorayaki.

Every time Takada-san sees me eating dorayaki at my desk, she cracks up. For minutes at a time. All of you that live in Japan–give it a try. Buy some dorayaki, eat it at your desk, and I bet you five bucks someone in the nearby vicinity is going to call you Doraemon. (Doraemon loves dorayaki). 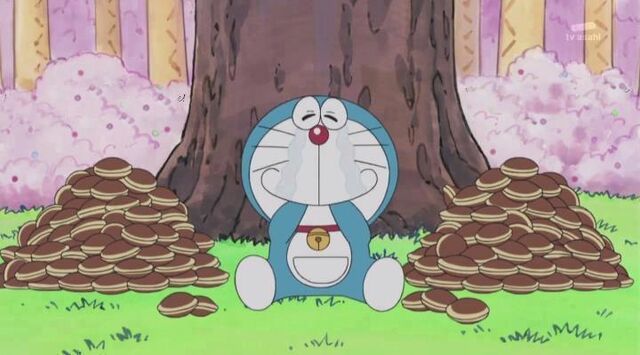 When Takada-san asks me just why I eat dorayaki every morning, I relay the cha sha bao story to her.

“Oh god,” I face plant my face into the desk. “Definitely not the title I was aiming to achieve in China.”

While I’m sad that I can’t eat my adored cha shao bao everyday, it brings a smile to my face when I remember the fuwyuans at Family Mart and their strange consideration towards me. Without even realizing it, I became the cha shao onechan. A ritual in the making.

When you live abroad for a long time, you accumulate quite a number of these strange quirks. At my favorite Shanghainese restaurant Jian Guo, the owner always gives me a table even at their peak hours and can recite all my favorite dishes. At my two must-go-to-bars Constellation and Mardi Gras (both run by Japanese), the bartenders know my name and chat me up, sometimes even offering a free drink while complimenting my nihongo. The congee and noodle shop near my house know what I’m going to order even before I open my mouth (goose egg congee and xuecai pork noodles). When I walk by all the fruit shop vendors, they never fail to greet me with a friendly ni-hao. On my daily walk to work, I can’t help but smile when I see the same group of 20 retirees practicing tai-chi together in the park I cut through to my office.

When all these little quirks and everyday pleasantries pile up and assimilate, they eventually start to form something real, something tangible:

In other words, Shanghai is my home.

I went back to the USA in December, but instead of feel like I was returning to the place ‘I belonged’ I felt like I was in a foreign country. It was like China and the USA flipped places, and everything in the USA had my eyes wander and fingers pointing. In contrast, coming back to Shanghai and stopping by my favorite noodle shack on my return from the airport felt more natural to me than having a beer at my favorite Utah pub.

It’s strange, how the tables turn.